Walk down to the Causeway

After the bridge, lunch, and cute ponies,  we continued on to another National Trust site, the Giant’s Causeway. Wayne from Extreme Ireland Irish Day Tours told us some of the history and mythology associated with the geological phenomenon along the short drive to the site.

I’m not sure what this is, but it is terrifying and probably exactly what it looked like when Fionn and Ben met.

Legend has it that the rock columns that make up the formation are the remains of a road built by giants.  Wayne told us that the Irish giant and hero Fionn mac Cumhaill, sometime called Finn MacCool, was the rival of a Scottish giant called Benandonner.

Ben challenged Fionn to a duel, and built the causeway across the Channel so that they could meet. When Fionn saw Ben coming across the causeway, he realized how large his opponent was and decided to hide from him to avoid the battle.  Fionn’s wife, Oonagh, disguised Fionn as a baby and put him to bed in a cradle. When Benandonner came to the house to find Fionn, Oonagh told him he had gone out, but would soon return.  Ben saw the ‘baby’, and got curious about the size of Fionn.  He reckoned that the baby’s father, Fionn, must be a giant among giants, and he was frightened back to Scotland. As he ran back across the causeway to his home, he destroyed it behind him so that Fionn could not follow to give him the business.

While this is a fantastic story, the geological reasoning for the formations is almost as thrilling. Sometime 50 million years ago,Northern Ireland experienced a lot of volcanic activity.  Molten basalt leaked through the chalk creating a lava plateau.  The lava cooled, and when the rocks contracted they created hexagonal pillars that we see today.

Regardless of how it was formed, this is a BEAUTIFUL site, and truly a national treasure worthy of protection by the National Trust.

The visitors center was nice looking, but we were warned it was way over-priced so we skipped it and decided to walk down to the stones. It was super windy, and a little bit chilly, but again, the beautiful views along the way made it worth it.  The path down to the rocks wasn’t too long, but the weather made me long for a quick stop then a jaunt back up the hills to the pub!!  We got to the bottom of the hill, saw the causeway, and I said, “ok, let’s go!”

Luckily Charles convinced me to sit a moment, and then he asked me to marry him!!  I’ll spare you the details, but it was great, and I can’t imagine a more beautiful and inspiring place to get engaged.

We looked around a bit more, took pictures, then headed back up the hills to the pub, The Nook.  The pub was perfect, we had a Guinness, and then stopped at a little shop to buy some delicious honeycomb candy along with MORE postcards.  I also took the requisite phone booth photo, since we were in the UK, after all, and I wasn’t so uncool to do something so touristy in London.

Back on the bus, Wayne asked if everyone had a good time, and if anyone happened to get engaged at the Causeway – we did!!  On the way from the coast to Belfast, we stopped by Dunluce castle.  The castle is over 500 years old, and is in serious disrepair.  This is 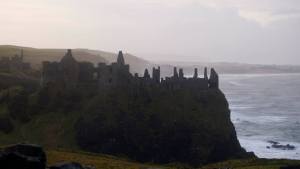 one of those cases where “ruins” rather than conserved sites are the most beautiful.  The castle is right on the edge of a cliff, which is great for defenses but not so safe, as it turns out.  Parts of the castle have fallen into the sea, and part of the kitchen next to the cliff face collapsed into the sea during a party One story says that when the kitchen fell into the sea only a kitchen boy survived, as he was sitting in the corner of the kitchen which did not collapse.  This castle is also said to be the inspiration for C.S. Lewis’  Cair Paravel in the books Chronicles of Narnia.

We didn’t have NEARLY enough time in the north of Ireland, and we need to make another trip soon.

To See Next Time:

#mood
Today's bright spots: we sold our house, and I put on actual (cute) shoes! Later date with @abby.gautreau to watch Tiger King, then a happy hour at 6... still working on chickens...
Welcome to my Covid-19 home office. It's real weird and full of bizarre coworkers.
Until tomorrow... Disdainful face aka the face, especially for @syd.jam and @lindsey_bells 😂😂😂😂💀⚰🥀
Day 12 or whatever: my dog is sick of me alternating cooing and watching him sleep and screaming "can I pet that dawwwwg????" at him. Also close up of FranFace. And Harry sleeping with his Christmasdog last night. #HarryClary #MissFrances
#shelfie from when I grabbed a few things before campus closed (for the test of the semester, we found out today). I grabbed some things from this shelf but definitely havent unpacked them yet.. #WhatRemains #DeathStudies #ajournaloftheplagueyear